Many have asked how JR is doing.

So with the okay from my mother-in-law, let me tell you about a boy and his best friend, my son and his papaw.

Losing someone you love is hard at any age.  Its hard to wrap our minds around the idea that our loved one is not here physically anymore. It’s hard on adults to process the loss, so just imagine you are seven and autistic.

I was blessed to have my father-in-law in my life for over eleven years.  He was one of those guys that loved to help everyone. I swear he never met a stranger. If he had it and you needed it, well then it was yours.  His smile was infectious and that laugh, oh how I miss that deep belly laugh.  I did not know him as long as most, but in my time with him I discovered how much and how deeply he loved people. And you know what else? He loved being a papaw.

When my husband and I got married, my in-laws became instant grandparents to my two preteen children.  When my husband and I decided to become foster parents, they were on board with the idea and were excited for the journey that awaited us all. And from the moment our wild man was placed with us, all of our worlds changed.  From the second he came to us, so tiny and so sick, I knew he was ours.  And on a cool day in September 2013, two and a half years after wild man was first placed in my arms, papaw Jim(along with our whole family) was in the courtroom with us as JR became forever ours. JR had us all wrapped around his little finger from the beginning. But the two of them had a special bond. They were inseparable.

JR went everywhere with papaw.  Whether it was to the grocery store or down to the wrecker (tow truck) shop, it didn’t matter to them. He was so excited when papaw bought him his own car seat for his truck.  JR loves that truck, and he loved going bye-bye with his favorite person. My father-in-law never saw our JR as a child with autism, to him he was just his grandson. His beautiful, full of energy, always laughing, popcorn eating, adventure seeking grandson.

After the “twins” arrived to our home, my father-in-law offered to start taking JR to his OT, speech, and music therapy appointments on Fridays.  It quickly became their thing.  My in-laws would pick him up shortly after I got our daughter on the bus and off they would go on their weekly adventure.  He loved spending his Fridays with them.  My father-in-law also filled in for us at his preschool when they would have special days or field trips that my husband or I could not go to.  He always found a way to make sure JR was included in everything at the school. He became more than just JR’s papaw, he was the classroom’s papaw.

In my son’s words, Cancer sucks ass. And he is 100% correct, cancer does suck ass.

My father-in-law was the healthiest sick man I have ever known.  He never complained or questioned why him, at least not in front of us.  He always had a smile on his face when he was around the kids.  They never seen him as sick. Hearing the words, he has cancer, took months for all of us to process.  How could he get sick? He was our rock. The doctor’s had to be wrong. He was a fighter. He did everything he could to stay strong and beat the hand that laid before him. As the days turned into months and he became weaker we tried to prepare ourselves and the kids. We explained things to our little loves in a way that we hoped they would understand, but how can we expect them to understand when we don’t fully understand ourselves? 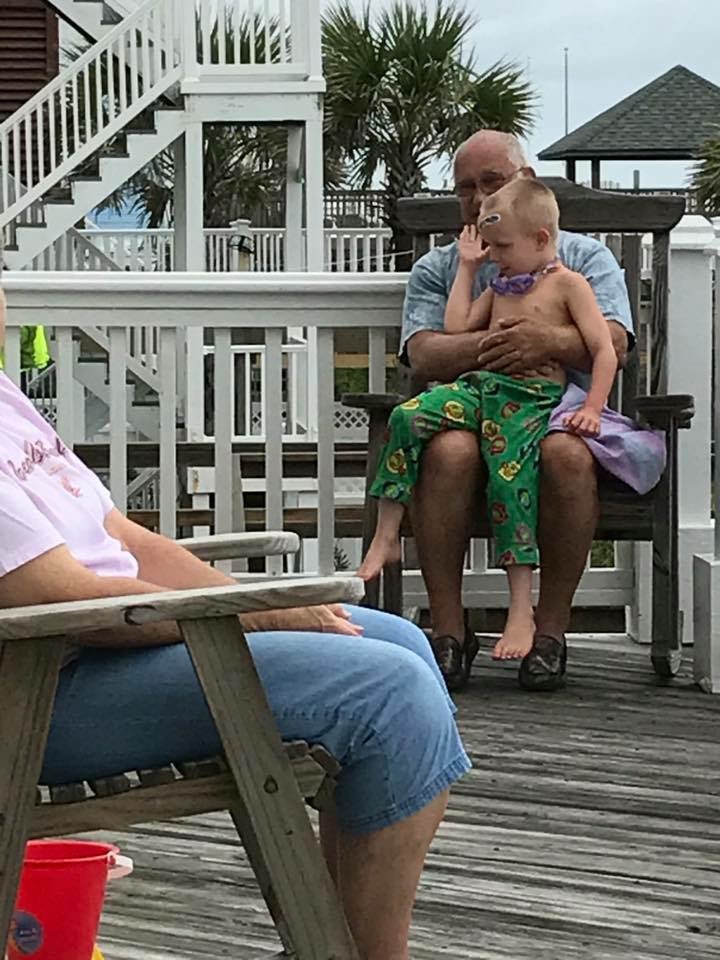 Halloween night, I called to see if he was up for some trick or treat visitors.  I drove my twelve passenger van through the sea of candy hungry neighborhood children so that our kiddos could get to papaw and mamaw’s house. Papaw made his way out to the porch and stood while holding the back of a chair. He made sure to tell all the kids he loved them and made sure they all got more candy than they needed. JR asked if he could go get a prize out of the treasure box and of course he was gone before anyone could say yes. We visited for a few minutes and gave hugs goodbye and off we went. When we got back into the van the first words out of JRs mouth were, momma papaw must be getting better. He was standing tonight. I will forever be thankful for this last memory he gave to our kids. I know it took everything out of him to come out and stand and pass out candy. But he did it for them. And he did so with his signature smile on his face.

JR did not just lose his papaw. He lost his best friend.

There has not been a day that papaw Jim is not mentioned at least a thousand times by our sweet boy. JR can not process what has happened. He is fixated on the why’s and how comes. He is lost without his number one fan. He loves for us to tell him things the two of them done, and he always has a few of his own stories to share. He sleeps with the flashlight he got out of the treasure box on Halloween night. And he talks to papaw’s picture he had me hang in his room. He asks if we can make an airplane and take a trip to heaven and he is full of questions about cancer and death. Some days he is happy, knowing he will see papaw again other days he cry’s non stop for he misses him more than anything.

The two of them shared a love of the ocean, swimming, and eating cheese flavored popcorn. They loved “fixing” things and taking drives. There will always be a great big place in JRs heart for his papaw Jim. And because of JRs unique look on life I know for a fact papaw Jim will live on through him and us. He may not physically be here with us but his spirit is strong, especially around our wild man. I know when JR is in his room and I ask, who are you talking to? And he replies papaw Jim, I know that he really is. Thank you for looking in on him. Life will be hard without him but you can bet JR will remind us of something the two of them did that will bring a smile to our faces daily. Their relationship will live on through the memories they made.

So thankful for the memories, precious, precious memories. In JRs words, Heaven is an extra special place now with papaw Jim in it. Yes it is little buddy. Yes it is.